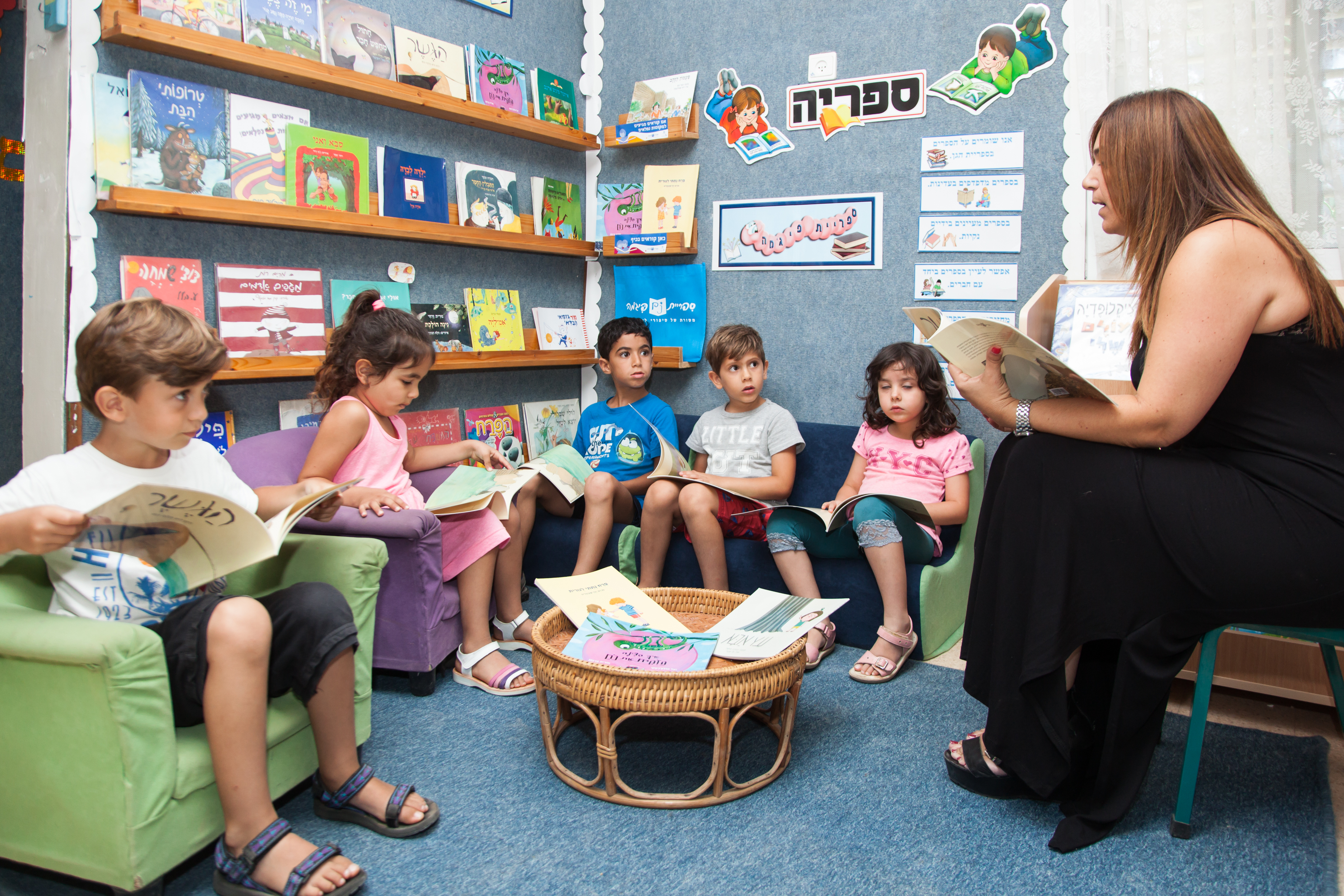 When you see a newborn and then watch her four years later, climbing to the top of the jungle gym, you can’t believe it’s the same child. That’s the feeling that overcomes me when I look at Sifriyat Pijama, the Israeli sister program of the PJ Library.

Sifriyat Pijama, which monthly gives away illustrated Hebrew picture-books in pre-schools, started as a pilot four years ago in Israel with 3,000 children. This school year, it has grown to 194,000 children, about 80% of Hebrew-speaking children in the state system. The books, which deal with Jewish values and Jewish/Israeli heritage, arrive by courier each month to the preschool. The teacher reads the month’s selection to the children and often does an activity as well. Then each child receives his or her own copy to take home to enjoy with family and add to the home library—a total of twenty-four books over a child’s three-year preschool career. Boosted by funding from the Ministry of Education, Sifriyat Pijama, a program of the Harold Grinspoon Foundation, is giving away more than 1.5 million books a year, making it the largest purchaser of children’s books in Israel after the country’s biggest book store chain, Steimatzky.

But like that four-year old child, it is not just a matter of physical growth. Sifriyat Pijama has matured into a program that is daring to climb to new heights, helping to create a genre of picture books new to the Israeli market. Working with publishers, Sifriyat Pijama is producing books which deal with Jewish heritage in a way that will engage both secular and religious Israeli Jews. This year, out of the sixteen titles Sifriyat Pijama is distributing (eight for 3-4 year olds, eight for 5-6 year olds), seven are newly created for the program. All together since Sifri­yat Pijama came to Israel, it has created a total of fifteen new books.

It was not what we set out to do. But there was no choice, given the difficulty in Israel’s religiously divisive society of finding books that suited Sifriyat Pijama’s agenda of promoting common Jewish values and heritage. In Israel, children from the religious sector tend to read Bible and Talmudic legends, and do-good stories, with illustrations depicting kipa-headed boys and modestly dressed girls. Meanwhile, secular children are growing up largely on books devoid of any mention of Jewish topics—books which observant families worry depict behavior inconsistent with their way of life. We were desperate for books that would appeal to both populations and address aspects of Jewish values and heritage on which there is broad agreement.

Furthermore, some topics are under-represented in both the religious and the secular market: aliyah and olim, biographies for young children on Zionist figures, Jewish folktales, particularly from the Sephardic tradition. For example, we found there was no Israeli version in print of that classical folktale about the poor man whose rabbi tells him to add his goat, chickens and cow to his crowded house—so when he takes them out the house is roomy. There are at least five versions of this story on the American market. We could have translated one of those books, but it seemed a pity that this very Jewish story should not have an indigenous Israeli version. Responding to our urging, leading Israeli publisher Am Oved recruited one of Israel’s premier satirists, Ephraim Sidon, and teamed him up with prominent illustrator Danny Kerman to produce a rhymed version of the story, which Sifriyat Pijama will distribute this year.

Sifriyat Pijama requires that any book it creates with a publisher be available in a commercial version as well. This is to assure the books will have a shelf-life beyond their distribution through Sifriyat Pijama, which changes its book selection from year to year to avoid having children receive copies of the same book more than once in the course of their three years in the program. Publishers have been pleasantly surprised to discover that Jewish stories, when illustrated to appeal to modern audiences, do well in stores. And it is making them open up to publish­ing more such books.

We were delighted when a publisher approached us with a manu­script of an enchanting Ethiopian folktale, about an old man who tries to get rid of his tattered shoes from the old country, only to have everyone try to return them to him. What child (and parent) will not be able to relate to how difficult it can be to shed old things—or outdated versions of ourselves? The manuscript had been sitting around for years before our hue and cry for folk tales, and for stories that address aliyah were heard. The result, Mr. Menaseh’s Old Shoes(English title: An Old Pair of Shoes), is itself an aliyah tale—the folktale was told to veteran Israeli author Ronit Chacham by an Ethiopian immigrant years ago, and the book is illustrated by Russian immigrant Masha Manapov.

Sifriyat Pijama is also giving new life to traditional Talmudic tales—either by the re-issue and/or re-illustration of out of print books, or by the publication of new ones. This year, Kinneret-Zmora Bitan- Dvir has teamed up with prize-winning Israeli children’s author Shoham Smith to issue a new picture book based on the Talmudic tale about Rabbi Akiva learning late in life to read Other renditions of Talmudic tales by Israel Prize winning author Dvora Omer —about the renowned patience of Rabbi Hillel and the visit by a Roman emperor to Rabbi Yehuda Hanasi, as well as a traditional story about the choice of where to build the Holy Templehave been resurrected from her earlier anthologies and illustrated to reach a new generation.

No less important has been the effort to stress common Israeli culture around popular Israeli songs that have become classics. Sifriyat Pijama urged the production of a book, Good People, based on the song by the late Naomi Shemer (best known in America for Jerusalem of Gold), and Who Loves Shabbat, with lyrics by late songwriter Ehud Manor. Both were Israel Prize winners whose songs are popular among a wide swathe of the Israeli public.

We have also caused the “cross-over” of some religious authors rarely read by the secular public. We did this by re-illustrating stories whose religious look limited their appeal to secular audiences. The stories—Yael’s Independence Day by Rivka Elitzur and The Land of Preschool Children by Emuna Alon—boosted with charming new illustrations, received high ratings in secular preschools from teachers in the program.

Finally, we have had translated some PJ Library favorites into Hebrew: Bagels from Benny by Aubrey Davis (known as Grandpa’s Bakery in Hebrew) and One Little Chicken by Elka Weber. The latter, a retelling of a tale about Rabbi Hanina Ben-Dosa, underwent re-illustration for the Hebrew version so that it is set (historically accurately) in the ancient Land of Israel rather than in the rural nineteenth century setting of the English-language original. Its Israeli publisher, Yedioth Ahronot, was taken aback when the first commercial printing of 2,000 copies sold out in weeks.

Sifriyat Pijama has taken advantage of its growth to create a revital­ized treasure trove of high-quality Jewish children’s books. As we watch this precocious “child” grow up, we hope that the books we are creating today will help Israelis feel more connected to their heritage and to each other.