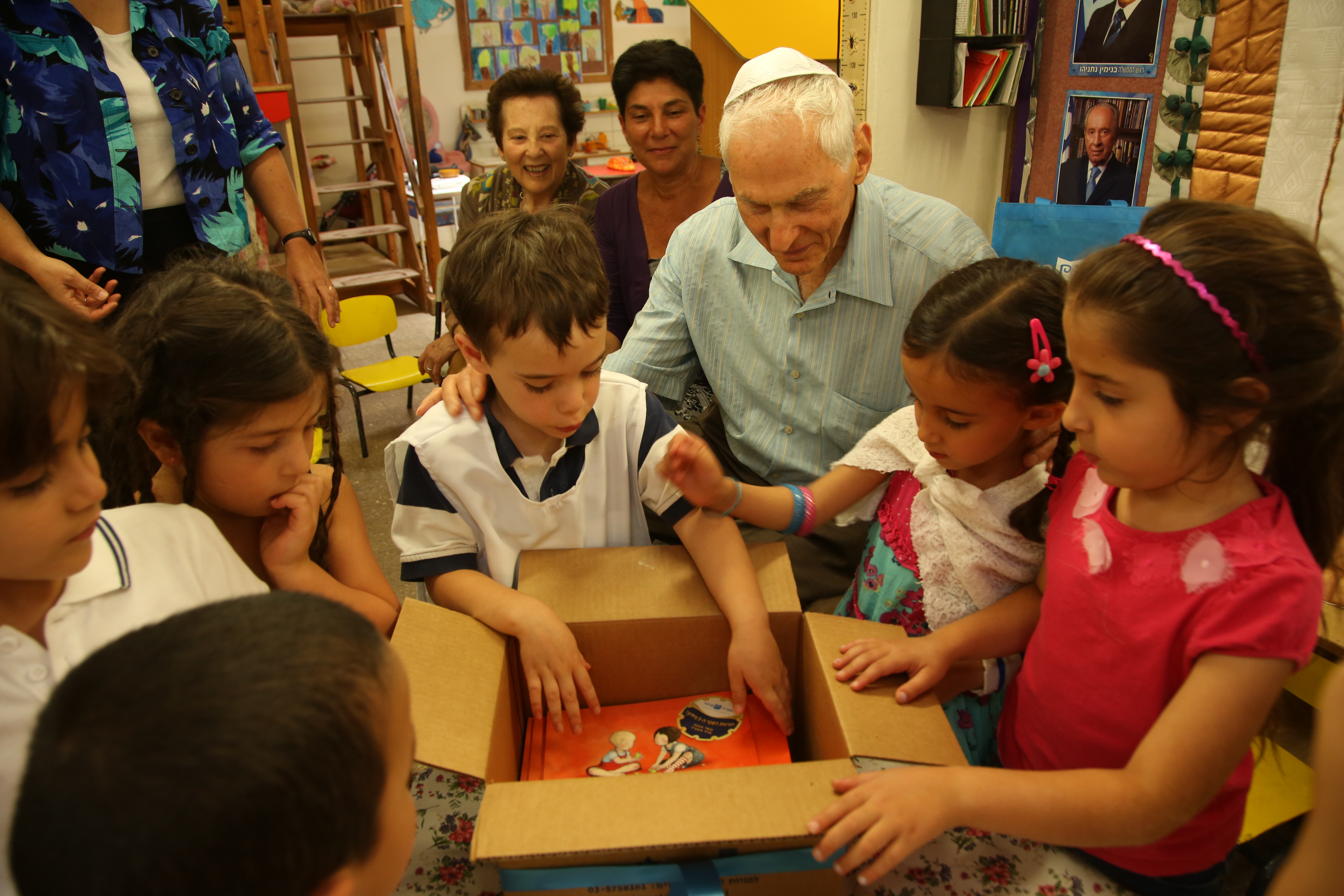 One philanthropist aims to instill a love of reading in young children – The Jerusalem Post, June 11, 2014

In the last school year alone the Sifriyat Pijama project distributed some 1.72 million books to 210,000 young children and their families.

As Israelis flocked to squares and shopping centers throughout the country on Wednesday to satisfy their passion for books during the annual Hebrew Book Week, one man has aimed to introduce this passion to the younger generation all year long.

Harold Grinspoon, a Massachusetts- based Jewish philanthropist who made his fortune in real estate, has taken the responsibility upon himself, through his charitable foundation, to instill a love of reading and Jewish values in preschool and kindergarten children.

The inspiration for his program, PJ Library, which distributes free Jewish themed books to young children in the US and Israel came from the most unusual source – Dolly Parton.

“I was driving in my car a few years ago listening to public radio, when I heard about Dolly Parton’s Imagination Library,” he recently told The Jerusalem Post during his visit to Israel. “She distributes books to underprivileged children and I had worked with inner-city kids and thought what a great idea, but why not do it with Jewish books?” Grinspoon recalled that around that time he also read two studies which cemented his desire to pursue the project.

“I read a study that showed that the first 2,000 educational days of a child’s life are the most important and children pick up many of their habits during this time,” he said.

In addition, the second study stated that young families make the decision about their Jewish identity – whether to raise the children Jewish, keep Shabbat, or go to Synagogue – within the first five years of their child’s life.

“I thought that’s where we have to be and catch those families [forming their Jewish identity] and so we had the idea of sending them a Jewish-themed book to encourage parents to sit down and read a book to their children with Jewish content – it seemed like a no brainer,” he said.

In 2005 Grinspoon tried a first run, distributing some 200 Jewish-themed books to interested families in Western Massachusetts. Since then, nearly a decade later, PJ Library has expanded to include Jewish communities across the United States, Canada, Israel, Australia and Mexico.

“I never imagined the program would grow to such a scale,” said Grinspoon.

“We receive lots of thanks from parents who are spending more time reading with their children and who themselves are learning about Jewish traditions and values.”

Following the tremendous success in the US, the foundation examined the option of transferring the program overseas and adopting PJ Library, or Sifriat Pijama to Israel.

“We adapted the program to better fit the Israeli system, through bringing the books into the classroom,” said Galina Vromen, director of Israel operations for the Harold Grinspoon Foundation.

While in the US the books are sent to children and their families who have signed up for the program via mail, the Israeli branch of the foundation partnered with the Education Ministry to establish the Sifriat Pijama project in preschools and kindergartens throughout the country.

As part of the project, eight titles are delivered monthly, during the school year to preschools with individual copies for each child and two copies for the classroom. Teachers engage their students in fun and educational activities surrounding the books’ stories, and after exploring them at school, children receive copies for their home libraries.

“What we hadn’t realized was that by bringing the project into the classrooms you gain an educator, a teacher who can really do something with the book, so that by the time the children bring the books home they are really excited and they feel empowered that they can share this with their families,” explained Vromen.

The books are carefully selected each year by a committee of education experts and include a mix of classic Hebrew books, translated works and newly created literature spurred by the program.

Among the books include Israeli classics such as Good People by Nomi Shemer and Who Loves the Shabbat? by Ehud Manor as well as Bagels from Benny and Independence Day for Yael.

“We are creating a common literature for Israeli children,” said Vromen, “we are deciding what books this generation is growing up with, and this is a huge responsibility and we take it on with great pride,” she said.

In addition, the last pages of each book also include suggestions to parents for joint activities and discussions about universal Jewish values.

– it starts with a conversation in school and the children then take that enthusiasm home to their families,” added Vromen.

In the 2013/14 school year alone, the Sifriat Pijama project distributed some 1.72 million books to some 210,000 young children and their families. In fact, this past month Grinspoon arrived in Israel to distribute the five millionth book.

“It is really a remarkable experience to be in the classroom and see firsthand how the children read the books and engage in the activities and then take their books home in a little bag,” he said.

Following the vast success of these programs in both the US and Israel, Grinspoon said he hopes the PJ Library project will continue to expand.

In January this year, Maktabat al-Fanoos, “Lantern Library,” was launched in Arab-speaking preschools as a collaborative effort of the Education Ministry, the Harold Grinspoon Foundation and the California-based Price Family Charitable Fund.

Since that time, more than 208,000 books were distributed to some 45,000 children in 1,750 preschools and kindergartens in the Arab sector, with plans to expand this program to reach 100 percent of public Arab- speaking preschools in the next academic year.

The foundation also launched a pilot program during the 2013/14 academic year in cooperation with the ministry for some 3,000 first and second graders to receive free books.

In addition, Grinspoon said he hopes to see PJ Library expand in Europe and Russia, “that’s the next big project.”

“Children today have so many toys, like their iphone or video games, and what we have created is a love of reading from a very young age in some kids that may have never even read a book before,” concluded Grinspoon.