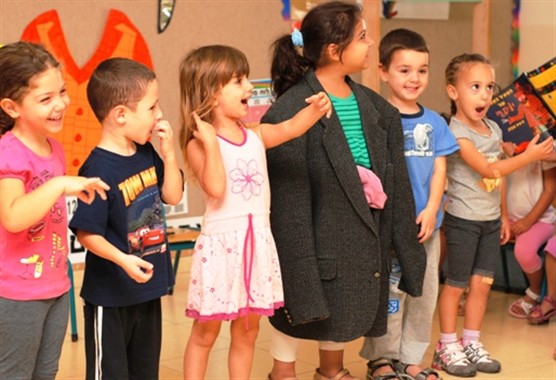 Three years ago, I was asked to explore the possibility of bringing the Harold Grinspoon Foundation’s highly successful North American program, The PJ Library®, to Israel.

The first question I had to address was: Is such a program needed—or desired—in the Jewish State. In North America, The PJ Library, which provides more than 65,000 Jewish books a month to families with young children in 130 communities, has proved effective in raising Jewish awareness, pride and knowledge among both affiliated and marginally engaged families. Was such a program relevant for Israel, and if so, how best to implement it? True to the old Jewish adage, there were three opinions for every two Jews in Israel I asked.

The foundation decided to forge ahead with Sifriyat Pijama (Hebrew for Pajama Library); for, although Israeli children speak Hebrew and celebrate Jewish holidays as national holidays, large swathes of the population know little else about Judaism and the richness of their Jewish heritage. We felt that books would be equally effective also within the religious population in actively encouraging family discussion about values, adding depth to phrases children may often hear but not truly discuss. The results have been gratifying. In its first year of operation during the school year 2009–2010, Sifriyat Pijama involved some 3,000 children. The program drew the attention of the Ministry of Education which has become a funding partner, helping to extend the program this academic year to more than 42,000 children, aged 3–5, in some 70 communities throughout Israel, mostly in the under-served north and south of the country. The program functions both as a Jewish values enrichment program and as a reading readiness program.

The books are chosen by a panel that includes experts on Jewish education and representatives of the Ministry of Education, and the books are distributed by the Israeli Center for Libraries. Unlike North America where books are mailed to families, in Israel the books are distributed by courier to more than 1,500 classrooms each month during the school year with a copy for each child and an additional copy for the classroom. The program in Israel has been has been immeasurably enriched by the involvement of teachers, with teacher training provided by the Ministry of Education.

The wide variety of activities teachers have implemented around the books and the role they play as family educators have helped to successfully inculcate the Jewish values in the books into children’s lives and encourage families to read together. Our surveys of teachers show that about 75% read the book at least twice in the classroom, and more than 50% regularly do additional activities around the month’s selection. In Israel, we have focused largely on Hebrew books that deal with universal values, books that are not at first glance overtly Jewish—but which provide a platform to talk about the Jewish perspective on uni- 60 Jewish Book World Spring 5771/2011 www.jewishbookcouncil.org Sifriyat pijama: The PJ Library Makes Aliya By Galina Vromen Harold Grinspoon, creator of the Harold Grinspoon Foundation, whose programs include the PJ Library and Sifriyat Pijama, is this year’s recipient of the Jewish Book Council Impact Award presented at the National Jewish Book Awards. See p. 5 for details. versal values.

The books are commercially available, but the Sifriyat Pijama edition includes a guide for parents with questions for discussion and family activities that seek to introduce or reinforce a “Jewish vocabulary” around Jewish values. For example, one of the books—the Hebrew version of Simms Taback’s Joseph Had a Little Overcoat—shows how the value of bal tashhit is linked to recycling and suggests parents and children look around the house for items that once served one purpose and are now used for something else (a cracked plate used under a potted plant, etc). At the same time, teachers initiate class book-related activity: they discuss what the children found at home in their search for recycled item, they have children, sometimes with parents in a family workshop, think up new uses for Joseph’s coat.

One teacher, inspired by the book, created sukka decorations of recycled materials. Another had the class create a border around the schoolyard with recycled bottles. Many teachers have told us that Sifriyat Pijama books are the only children’s books in the homes they work with. One, from the northern town of Carmiel, wrote us: “The books have been clearly chosen with great care. The children love hearing them over and over again. Certainly in a class like mine, where 80% of the children are children of immigrants, a program that develops the children’s vocabulary and increases reading is especially valuable, as well as its focus on Jewish values and heritage.” Personally, I am in awe of the creativity of the teachers, and impressed by the thirst of parents for a way to connect in meaningful ways with their children, in their ambitions for them, and by the dozens of letters of gratitude we receive.

I will never forget a letter from one father, an Ethiopian immigrant who wrote in eloquent Hebrew: “The fact that my daughter, Shilat, gets to take the books home and that she will at the end of the year have a library of nine books, moved me so much I had to write to you. These books that I and my wife read to Shilat helps bring us closer to her and help us to find out what she is feeling. The parent guides explain how to read, what to ask, how to gage the level of her interest…the books have increased her self confidence, motivating her to want to read by herself, increasing her vocabulary and her ability to describe things and to tell us and others the story orally after we have read it.” Most of the books in Sifriyat Pijama are different from those in its North American counterpar: Sifriyat Pijama does not cover Jewish holidays or bible stories which we feel are already well covered by Israeli curricula. But there are also some books common to both programs: Joseph Had a Little Overcoat (known in Hebrew as HaMeil HaMufla Shel Yosef), Bone Button Borscht by Aubrey Davis (Marak Kaftorim in Hebrew), as well as Davis’ Bagels from Benny (HaMafiya Shel Saba). The existence of some common books has opened the way for joint programming and partnership between PJ Library communities in North America and sister Sifriyat Pijama communities in Israel. For example the northern city of Akko is linked through the federation system with a group of cities in the mid-West known as the Central Area Consortium Partnership 2000. There is an active ongoing relationship between preschool teachers in these communities and that has been leveraged to exchange activity ideas on Sifriyat Pijama books used on both sides of the ocean. Other communities are showing interest in linking parents whose children enjoy the program in Israel and North America. It will be interesting to see how such partnerships spread and develop. The Harold Grinspoon Foundation makes its Sifriyat Pijama books available in Hebrew in North America at a nominal price, opening interesting opportunities for ways to link Hebrew-speaking families in North America to the PJ community. The foundation is actively seeking more funding partners to increase Sifriyat Pijama next year in cooperation with the Ministry of Education, and hopes to double in size to serve 88,000 children. If the goal is met, it would mean about half of Jewish preschoolers in the Israeli school system will be receiving Sifriyat Pijama next year, courtesy of their government and the generosity of Jewish philanthropy. How appropriate for the People of the Book! More information on Sifryat Pijama is available on www.pjisrael.org and on the website of The PJ Library www.pjlibrary.org. For purchase of Sifryat Pijama Hebrew books in North America please

contact jenna@hgf.org. Galina Vromen, director of Sifriyat Pijama, can be reached at galina@hgf.org.